Cities throughout the world, and throughout centuries, are subconsciously built around the timeless principle (coined as Marchetti constant) that puts the average daily main round-trip commute budget of one-hour (or 30-mins one way) for the inhabitants. In other words, the size of a city correlates well with the amount of travel time people are willing to tolerate. Thus, urban transport is all about accessibility, which is measured by the amount of opportunities (e.g. offices, shops, schools, gyms that are reachable within one’s travel time budget) rather than mobility, which is measured by travel speed.

During the pre-World War era, the fastest way to move around and within cities was by horses. The lack of speed differential between a pedestrian and a horse-drawn carriage rendered the absence for the need of speed-based street hierarchy. Cities functioned simple grid layout: crisscrossing of pathways naturally generate higher counts of plexus which form natural nodes of public interaction, where denser amount of opportunities for public interaction thrived.

Travel demand was well-spread across different directions at different times, as trip attractions and generations were fairly heterogeneous (i.e. dwellings, marketplaces, places of worship and public buildings were closely knit throughout the urban fabric).

Travel demand efficiency (i.e. bidirectional vehicle load distribution across different directions, and different times of the day/week) relies on travel pattern sustainability, which is mainly dictated by how trip generations and distributions are shaped (diagram sourced from Translink Network Primer)

With the Post-World War mass motorization trend, cities began to sprawl outwards as desire for single-family home and car ownership grew among the baby boomers (with exception of select European and Far-Eastern cities that follow rail-oriented metropolitan growth trajectories, such as Tokyo and Stockholm). Highway engineers devised speed-based road hierarchies for unimpeded, free-flowing urban mobility, and urban planners compartmentalized land use planning according to specific uses.

The hallmark of grid-based transport network persists throughout the pre-automobile colonization era, as pointed by the above early maps of Houston in 1873, and Kuala Lumpur in 1895 (map sources: birdseyeviews.org, tslr.net)

Previously, with the old city grid, a few perpendicular routes cut across the grid, forming the primary Arterial, and the rest of routes formed the secondary Collector/Distributor. Cul-de-sacs were limited to clusters of urban dwellings that were compact and walkable. Vibrant, diverse places of urban interactions were the natural outcomes of the geometric crisscrossing of these perpendicular routes. 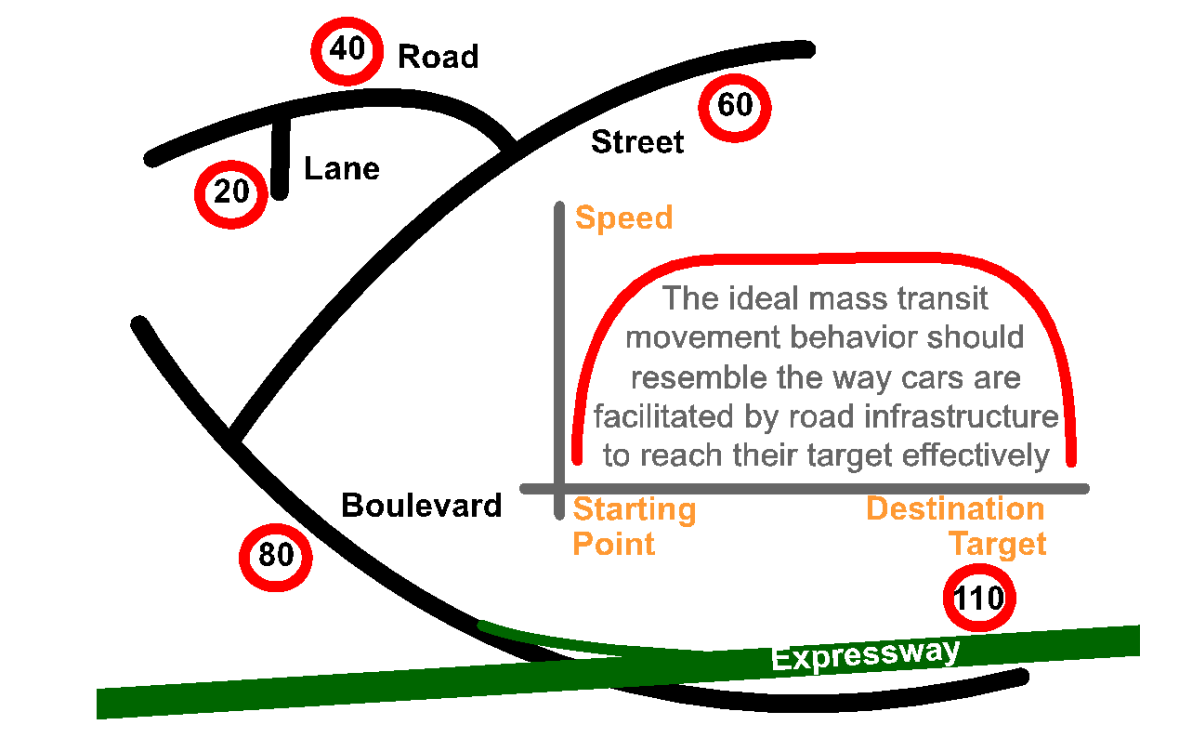 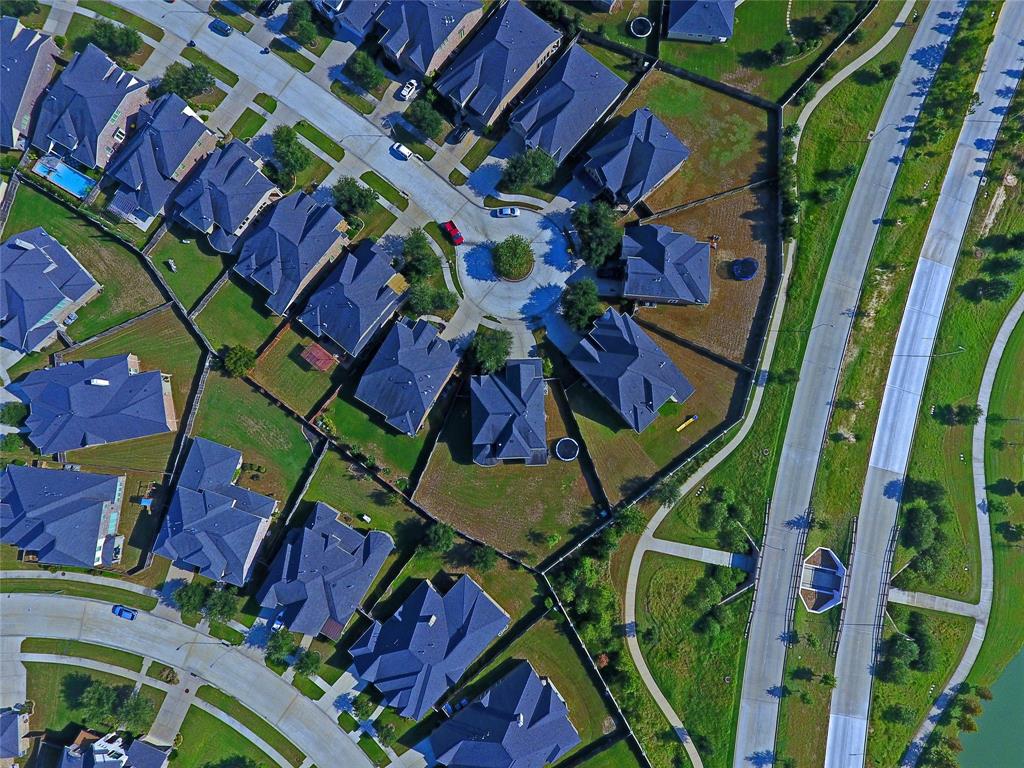 Cul-de-sac land use divisions and dead-end roads in one of Houston’s contemporary suburbs (source: bradfieldproperties.com)

Contrast that with a sprawling metropolis with dendritic-based freeway network, where most of the travel demand corridors have poor travel demand efficiency (i.e. one-way peak-only demand).

Imagine a housing-only township that branches from a main thoroughfare, where road infrastructure is typically designed for one-way peak-only commute bottlenecks. Buses that most effectively serve workers from Enclave Neighborhood A to Job Centre B has to run via the higher-order metropolitan freeway, but it will run empty on reverse-peak direction (or almost empty on both directions during off-peak), can’t serve other adjacent Enclave Neighbourhoods for the sake of maintaining competitive travel times, and can’t effectively double-role to serve non-workers going to School C and Mall D, which apparently are aligned along other lower-order, slower road corridors.

Cash-strapped public transport agencies typically respond by converting those suburb-to-downtown routes to run on lower-order thoroughfares in order to hit as much intermediate local destinations as possible, making the journey time unappealing to car-owning suburban dwellers.

Lower capacity feeder modes that run frequently and feed to similarly frequent but less-meandering, higher capacity surface transit may solve the first-last mile problem of homogeneous suburban cul-de-sac, but the system will still be less efficient as compared to a grid-based system.

Frequent circulating feeders that serve cul-de-sacs may be synergized with frequent surface transit, but the problem of travel demand efficiency remains unsolved

The advent of driver-less, autonomous vehicles may drastically reduce labour costs, but vehicle passenger load and energy consumption issues will go unresolved. Congestion costs will be higher if buses are substituted with e-hailing cars.

Rather than forcing public transport to speed up like cars on sprawling freeways to reach out as far as possible to far-flung jobs and services, a more sustainable solution is the other way around: focus future job and urban activity growth at strategic nodes within the existing metropolitan sprawl to increase the share of more sustainable, shorter-distance trips. These centres of metropolitan growth must be strategically positioned as natural transfer hubs or ‘crossroads’ of two or more frequent public transport corridors. 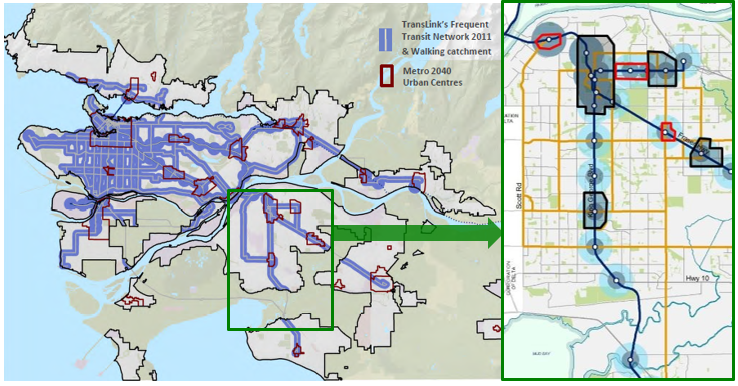 Other complementary measures include:

Suburban township enclaves that branch off freeways can be exclusively connected to each other through:

Fixity of car-based road network makes non-motorized network highly competitive in Houten, a suburb of Utretch, the Netherlands; notice how liberating is the cycling and train network as compared to the car network  (source: UITP Europe)